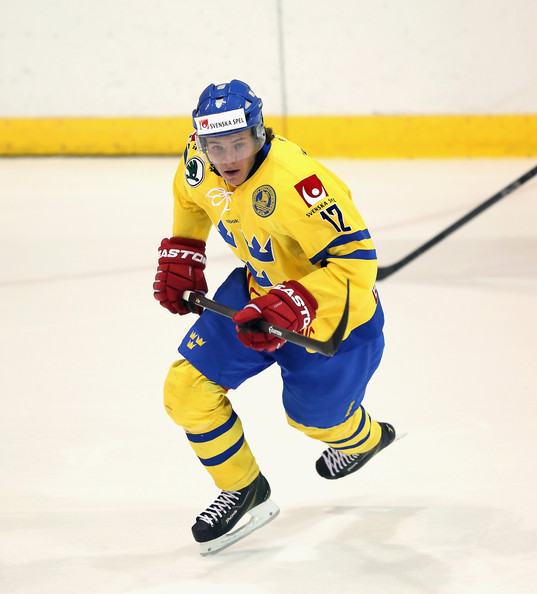 But Victor Olofsson could be the diamond in the rough that Sabres fans have been looking for. The seventh-round selection in 2014 (181st overall) has been lighting up the Swedish elite league this season and has generated a lot of buzz amongst Sabres fans.

Olofsson has scored 21 goals in 35 games which leads the entire Swedish elite league, he has also added 11 assists for a total of 32 points (10th in the league).

On the Elite Prospects website in a brief profile on Olofsson they wrote “a winger with natural goal-scoring instincts, he knows how to find open ice and has a good hard shot.”

This should be a breath of fresh air for Sabres fans because the lack of scoring depth on the Sabres is extremely concerning, but having a player with the scoring instincts of Olofsson in the prospect pool is a bit comforting.

Olofsson is only 5-11 and 172 lbs, so his size is a bit concerning but in the modern NHL lack of size is easily made up for in speed and skill which Olofsson seems to possess.

-His Shot
-His Skating
-His Scoring Instincts

His Shot
If anyone has seen any film of Olofsson, whether on twitter or on youtube or whatever they should immediately know that his shot is as deadly as they come.

A player that scores as often as he does has to have excellent accuracy, power or a great release and Olofsson has a deadly comibation of the three.

Olofsson has scored 54 goals in 185 SHL games, he started out his career slowly but has really blossomed into one of Europe’s premier goal scorers.

He shoots from anywhere, and has the confidence to believe that when he shoots he is going to score making him a deadly shooter that the other team must be aware of every time he is on the ice.

His Skating
Everyone knows that today any player who doesn’t have skating ability gets left behind very quickly (Matt Moulson, Frederick Gauthier, Mike Richards and the list goes on and on).

Olofsson has the skating ability that can allow him to keep up with anyone in the SHL. On countless occasions, he has shown his ability to fly up the ice (with and without the puck) in order to help generate offence.

The Sabres desperately need speed, it is extremely annoying to see Jack Eichel, Evander Kane and even Brendan Guhle fly up and down the ice with no one being able to keep up. Olofsson, at least looks like he has the skating ability to keep up in the NHL.

His Scoring Instincts
Olofsson’s shot is by far his most impressive skill, but when you couple it with his scoring instincts he becomes the elite goal scorer that he is (in Europe).

In the NHL scoring wingers like Laine, Ovechkin, Tarasenko and Kucherov all have elite shots but they also have scoring instincts that separate them from the rest of the league and Olofsson has similar instincts.

Olofsson has the knowledge to find gaps in the defence that put him in prime position to put the puck in the net.

If you look at Olofsson on the powerplay he has the same set up as Kucherov (I am not comparing the two). Olofsson sets up around the faceoff circle, opens himself up for a pass and is able to blast the puck past the goalie.

Olofsson, 22, is older than most Sabres prospects but he was a seventh-round pick so it is understandable that it would take longer for him to develop. However it is clear that he can dominate Europe and is ready to make the jump to North America.

As Kris Baker (SabresProspects) has mentioned many times he would like to see how he could develop on a two-year entry level deal. I agree completely, I would love to see Olofsson come to Rochester next year to see how he can adapt his game to North American pro hockey.

If Olofsson works out, I can imagine him as a utility forward that can play up and down the lineup, he can score at will and with scoring depth being a huge need for Buffalo having a player like Olofsson (if he can adapt his game) would be a huge addition.

He would be an ideal 2nd unit powerplay player, his shot makes him lethal with the man advantage and our powerplay has been abysmal this season.

As long as he develops Olofsson would be a huge addition to Buffalo and fans should monitor his situation over the rest of the season.