With Sabres Development Camp wrapping up, it’s time for another prospect pyramid. The prospect pyramid is another way to rank prospects but they’re ranked in tiers rather than just a huge list. Credit to Steve Dangle from SportsNet for the idea. If you’d like to see a list ranking prospects in a more traditional way, let us know @SabresFanatics on both Twitter and Instagram.
2016 Buffalo Sabres Prospect Pyramid
Steve Dangle’s Prospect Pyramid

Nylander had his fair share of struggles in his first year of professional hockey in North America. Sure the point production wasn’t where we all wanted it to be but the experience he gained during his time in Rochester is far more valuable for his development than just lighting it up in Mississauga. Nylander got a handful of games at the end of the 2016-2017 season and I don’t think he looked out of place whatsoever. Going into the offseason, Nylander’s primary task was to really just put on some muscle so he won’t get as pushed around along the boards when he makes the full transition to the NHL. No doubt his skill set, speed, and hockey sense are NHL ready. All Alex needs to do is get stronger and at this point in time, it looks like he’s done that. Nylander could possibly earn a roster spot out of camp but as of right now I believe he’ll start the season in Rochester. And there’s absolutely nothing wrong with him heading back to Rochester. He’d be a lock to make team Sweden for the World Juniors which happen to be in Buffalo this year and maybe he’ll even compete for a spot on the Swedish Olympic team since NHL players will not be participating. 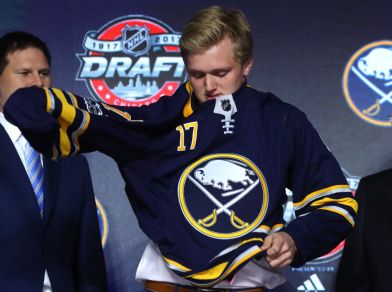 Mittelstadt was quite possibly one of the most skilled players in the 2017 NHL Draft. He plays at a very high pace, has a great set of hands, and has a great hockey IQ. But the major criticism that he faced heading into the draft was the fact that he couldn’t do a pull-up at the combine. I for one don’t really care that he isn’t that strong right now. That’s something that he can improve upon when he’s at the University of Minnesota next year. Casey Mittelstadt will get stronger no doubt about it and if he’s this good now while he isn’t all that strong, then just imagine how good he’ll be when he fills out more. Mittelstadt will play an important role on team USA at the World Juniors in Buffalo next year as they will try and defend their gold medal. I foresee Mittelstadt as a one and done player at the University of Minnesota. I think he’s gonna absolutely light up college hockey next season and maybe he’ll even play a few games at the end of the 17-18 season for Buffalo when Minnesota’s season is over.

Guhle is an exceptional skater who looks like will fit in perfectly in Phil Housley’s high tempo offensive system. Guhle was very close to making the Sabres out of camp for the past two seasons and I can almost guarantee you he’ll be close to making it again this year. Guhle played on one of the worst teams in the CHL in Prince Albert and he really stepped up his game when he was traded to the Prince George Cougars which was a far more superior team. About a month ago, Guhle was all but a lock to make the Sabres out of training camp but, with the acquisitions of Marco Scandella, Nathan Beaulieu, and Victor Antipin it’ll be very hard for Guhle to crack the opening night roster. I’m not going to rule out Guhle from making the team but it’ll be very hard for him to make it with the new and improved blueline.

Like Alex Nylander, Asplund was terrific at the World Juniors. He was a leader on the team and I thought he had a nice tournament. Asplund has gotten great experience playing against men in the Swedish Elite League for the last few seasons. Asplund was advised by Jason Botterill to stay in Sweden for one more year. So we’ll have to wait another season for him to suit up in either Buffalo or Rochester. Unfortunately, Asplund won’t be eligible to play in the World Juniors in Buffalo because he turns 20 years old shortly before the tourney starts. Asplund has aspirations to play for team Sweden at the Olympics. I just don’t see that actually happening but it’s nice that the kid has high expectations for himself. Asplund will have a greater role with Farjestad now that Minnesota draft pick, Joel Eriksson Ek will be playing for the NHL full-time next season.

Davidsson reminds me a lot of his fellow countryman, Rasmus Asplund. But it looks like Davidsson is a much better skater than Asplund. Davidsson will be going back to Sweden to play with Djurgardens and will likely increase his point production. Davidsson also played on the Swedish World Junior team along with Alex Nylander and Rasmus Asplund in 16-17. Davidsson will make team Sweden again for the World Juniors in Buffalo this Winter. He really stood out to me at development camp this week and I look forward to watching him develop over the next few years.

Pu had a phenomenal year in London of the OHL this year. Pu took on a larger role this year in the absence of Mitch Marner, Christian Dvorak, and Matthew Tkachuk and Pu absolutely flourished. Cliff has a great chance at making the Canadian World Junior team in Buffalo this Winter and Pu looks forward to the chance to play in front of Sabres fans. Pu is arguably one of the best skaters in Buffalo’s system and that’s a department that Buffalo needs to get better in. Pu will spend another season in London and then he’ll turn pro the year after that. I know fans like to look at the point production and like to think he’ll be a plug and play player in the NHL but he’s likely to start off in the AHL when he turns pro.

Luukkonen was one of the better prospects at development camp this year. I know Sabres fans are still mourning the loss of Cal Petersen but, it’s time to get over it because UPL is the real deal. I was amazed by how good Luukkonen was at dev camp. He just seemed very technically sound and had very good positioning. He is the goaltender of the future in my opinion. The sky is the limit for this kid. He’s probably going to be playing for team Finland at the World Juniors and maybe he can help them rebound from a disappointing outing last year.

These 4 players all have one thing in common. And that’s the fact that it’s time for them to start making a contribution to the NHL roster. All 4 of these guys will have a shot at making the Sabres for next season but it’s likely that only 1 or 2 of them will actually make the team (right now I think Baptiste and Fasching will make the team). Bailey has been inconsistent on his callups, Baptiste has looked pretty good int the NHL in the 14 games he played in Buffalo (especially when he played with Eichel), Fasching made the team out of camp last season but he had a bad groin injury that sidelined him  for a huge part of the season, and I really don’t know what they’ll do with Smith. He looked pretty good in the couple games he played at the end of last season but right now I think he starts in Rochester. The clock’s ticking on these guys and it’s time for them to make the jump to the next level.

Both Fitzgerald and Borgen are entering their junior seasons in the NCAA. Meaning that Sabres Twitter will start to freak out that they’ll elect to go to free agency in 2 years but that’s a topic for another day. Borgen and Fitzgerald were pretty nice finds by the former regime and they look like a couple of promising D prospects for Buffalo. Both of them have played for team USA at the World Juniors and Fitzgerald even won a gold medal at the most recent WJC. Don’t be surprised if one or both of them sign with Buffalo at the conclusion of their college seasons.

Hagel really made a name for himself at development camp last year after a lights out performance in the Blue and Gold Scrimmage. Hagel carried that success into the 16-17 season and showed that he should’ve been drafted significantly higher than the 6th round. I really like Hagel and if he continues to develop nicely he may be a very useful bottom 6 winger for the Sabres in a few years.

Laaksonen was a surprise pick, to say the least in the 2017 NHL Draft. Laaksonen wasn’t ranked really anywhere on any mock drafts and the Sabres picked him decently high in the 3rd round. Watching him at development camp, I was very impressed with him. He was a terrific skater and passer. The main thing that he really needs to work on is getting stronger and improving his shot. If he can do that Buffalo may have found a nice gem in the 3rd round.

6th Tier
Everyone Else