The 2016-17 NHL season was supposed to be another step forward for the Buffalo Sabres and their fans but ended in nothing but disappointment. Tim Murray echoed that the word ‘disappointment’ was the central theme of the player exit meetings and this made it’s wave all the way to the very top of the organization in the past week. The Pegula Family decided it was best for the organization to clean the house with the firings of General Manager Tim Murray, Coach Dan Bylsma, and the head Amateur and Pro scouts that came to Buffalo with Murray from Ottawa.

After setting the bar at a 95 point season and a playoff birth which was followed up with a 78 point season (3 points fewer than the season prior) there’s no other way to describe the past year for the Sabres than a disappointment. In a city in which disappointing seasons has been a routine for at least the past decade it seems that the Pegulas were not hesitant to nip this one in the bud and move forward.

There’s an endless amount of reasons why this past season for the Sabres was a failure and why it was necessary to move on from the recently fired members at the top of the food chain. It’s easy to pinpoint injuries as not an excuse, but a legitimate reason the Sabres underachieved by such a wide margin this past year. It’s a possibility that a few people would still have jobs right now if it weren’t for said injuries but it really doesn’t matter. At the end of the day Dan Bylsma’s system was not healthy on or off the ice for the group that Murray supplied and didn’t fit the mold of the style the team is built to play. Murray was not shy about this in his post season presser and was very critical of Bylsma’s system and communication with players. Murray put the blame on himself as well and all in all Bylsma’s coaching on and off the ice wasn’t good enough and neither was Tim Murray’s defense that he failed to address in his three years with the team other than the failed stint of Dmitry Kulikov.

SO, now that you’re caught up, lets get into the real substance of this post. Although a majority of Sabres fans wanted to see Dan Bylsma out the door, the firing of Tim Murray left a sour taste in the mouth of a lot of Sabres fans. It led to a lot of skepticism about the direction of the team moving forward and many seem to slowly be losing faith in the Pegulas as owners because of the discontinuity of the Bills and Sabres management in recent history. With all the negativity surrounding the team and it’s direction both locally and nationally here’s five reasons the Sabres believe it or not are going to be just fine moving forward:

1.) Lets start with the most unpredictable one shall we: 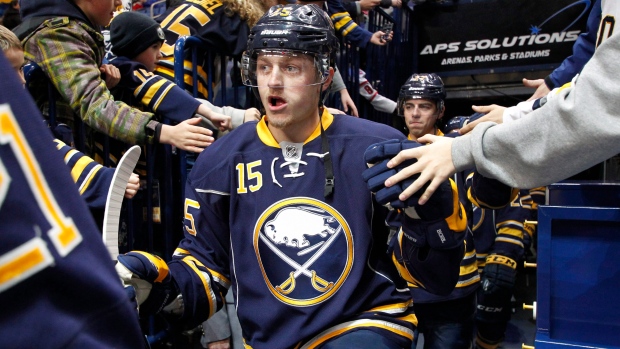 THEY STILL HAVE JACK EICHEL (whether he’s now the GM, coach, President of Hockey Ops, Owner, or really just a superstar and future captain who was one of the many Sabres who wanted Bylsma gone), anyways, HE’S STILL A BUFFALO SABRE AND IN FACT HE’S STILL REALLY GOOD AT HOCKEY. From the words of number fifteen himself it’s not far off to believe he hasn’t even “scratched the surface of what he can be” yet as a player for the Buffalo Sabres and as an elite player in the NHL. Eichel played at practically a point per game pace in his shortened but impressive sophomore season and he’s only getting better. Oh yeah, and he was playing on a lingering bad ankle for who knows how long. Oh yeah, and he was still playing for a coach who played him with the likes of Marcus Foligno, Matt Moulson, and Nic Deslauriers on a regular basis. Getting as far away from Dan Bylsma as possible is only going to make Jack Eichel better which will only make the Sabres better.

2.) If you don’t follow along with us on our Twitter account you’re probably not aware of our joke that “An NHL team traded ROR” (shirts coming soon btw). Although it’s a tad contradicting now that the Sabres fired the GM who got an NHL team to trade O’Reilly (for practically a box of rocks and a shiny penny in JT Compher) this doesn’t change the fact that an NHL team did indeed trade ROR and he just happens to be a Buffalo Sabre. This brings us to reason number two why the Sabres are going to be just fine, just like Jack Eichel, Ryan O’Reilly is a Buffalo Sabre. His contract is intimidating but this doesn’t stop O’Reilly from flying under the radar in the NHL as an elite player in the league. Sabres fans don’t fall into this group as they’ve seen how ROR is a high level player in almost every category and is a very above average 2nd line center. Hopefully under a new coach we’ll see O’Reilly’s minutes decrease a bit as Dan Bylsma got pretty much everything out of the tank from O’Reilly and we saw ROR’s best when he wasn’t playing what seemed to be every other shift.

3.) Whomever the Sabres hire for coach and GM definitely have a lot of work to do but at the same time a lot of work has been done for them. It’s much easier to tear something down than it is to build it back up and although there’s still building to do, a lot of it has been done for them. The foundation has been set, the core is there, and now it’s time to fill in the rest. This will be the task of the next Sabres GM and it’s gonna be the next coaches job to get the most out of them which Dan Bylsma struggled with. It’s time to get some depth especially on the back end and steady the ship. They have their big guns and it’s time to get them some needed help.

4.) Help is on the way. The absolute dumpster fire that was Sabres drafting up until 2015 really stifled the Sabres organizational depth especially when most of (although pretty useless) prospect depth was shipped out for Ryan O’Reilly & Evander Kane, or just never accounted to anything. The Sabres have some nice players that are likely a few years away like Cliff Pu, Will Borgen, Rasmus Asplund, and so on, and the new GM will add to this. The Sabres have the sixth best lottery odds in the upcoming draft and with at the very least 8th overall pick they’ll be adding another intriguing young prospect or trading it for a nice defenseman. More importantly, the Sabres have some young talent that should help them immediately like Brendan Guhle and Alex Nylander. I even went as far as predicting that Brendan Guhle will be a Calder Trophy finalist in 2018 on Twitter but we’ll have to wait for that one to play out. Although Alex Nylander’s stats in his first pro year in the AHL don’t jump off the page, people need to evaluate what he is as a player and as a teenager. He played a full pro season in a league that’s underappreciated competitively and developmentally and he just this week got his driver’s license. Nylander’s going to be even better as a player due to the fact that he learned the hard way in the AHL but if he would’ve put up 100+ points in a much less significant season developmentally in the OHL then no one would be worrying. After having a successful four game stint with the Sabres at the end of the year don’t be surprised when Nylander puts on some muscle and is an impactful player in the Sabres’ top six right away next season. The Sabres reportedly are on schedule to land top free agent defenseman from the KHL Viktor Antipin, who to this point has not made it known he’ll no longer be signing with the Sabres despite Tim Murray’s departure. Antipin would be a big addition to the shaky defense and could really become a breakout player. On top of Guhle and Nylander as the Sabres obvious top prospects no one should be forgetting about Justin Bailey, Nick Baptiste, CJ Smith, Casey Nelson, Will Carrier, Hudson Fasching, etc, who could all very well find themselves in full time roles in Buffalo come October. 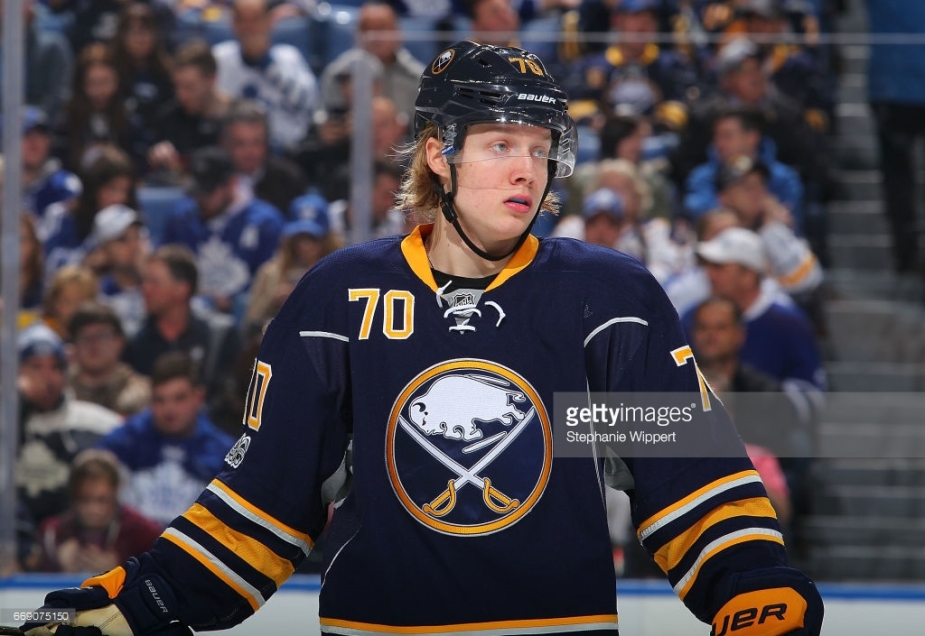 5.) This might be the most Buffalo Sports reason ever but so be it: with what the Sabres have it really can’t get any worse. The new management and coach should bring some fresh vibes to the organization and a new outlook on things opposite of what really just wasn’t working. The young studs are only going to get better and a new philosophy should help identify roles of players who stick around that under Dan Byslma really just did not have an identified role. With the expansion draft and free agency looming there’s no telling who of Zemgus Girgensons, Matt Moulson, Tyler Ennis, Marcus Foligno, Johan Larsson, and so on will be left and those players as well as the likes of someone like Zach Bogosian should have a more identified role and should only improve with the team. A guy like Zach Bogosian is an interesting player as he can skate like the wind and really has some nice offensive weapons yet under Dan Bylsma found himself in a physical role. Same goes for Zemgus Girgensons who many thought would be a nice piece for the Sabres going forward and then in his time with Bylsma was nothing but a checking forward who seemed to lose all of his offensive touch that he previously showed on historically bad teams.

If you made it to the end I’d just like to thank you for reading along and any feedback is very much appreciated. I’m confident that the Sabres are going to be in the right direction a lot faster than some others do and thought I would share a few reasons why.